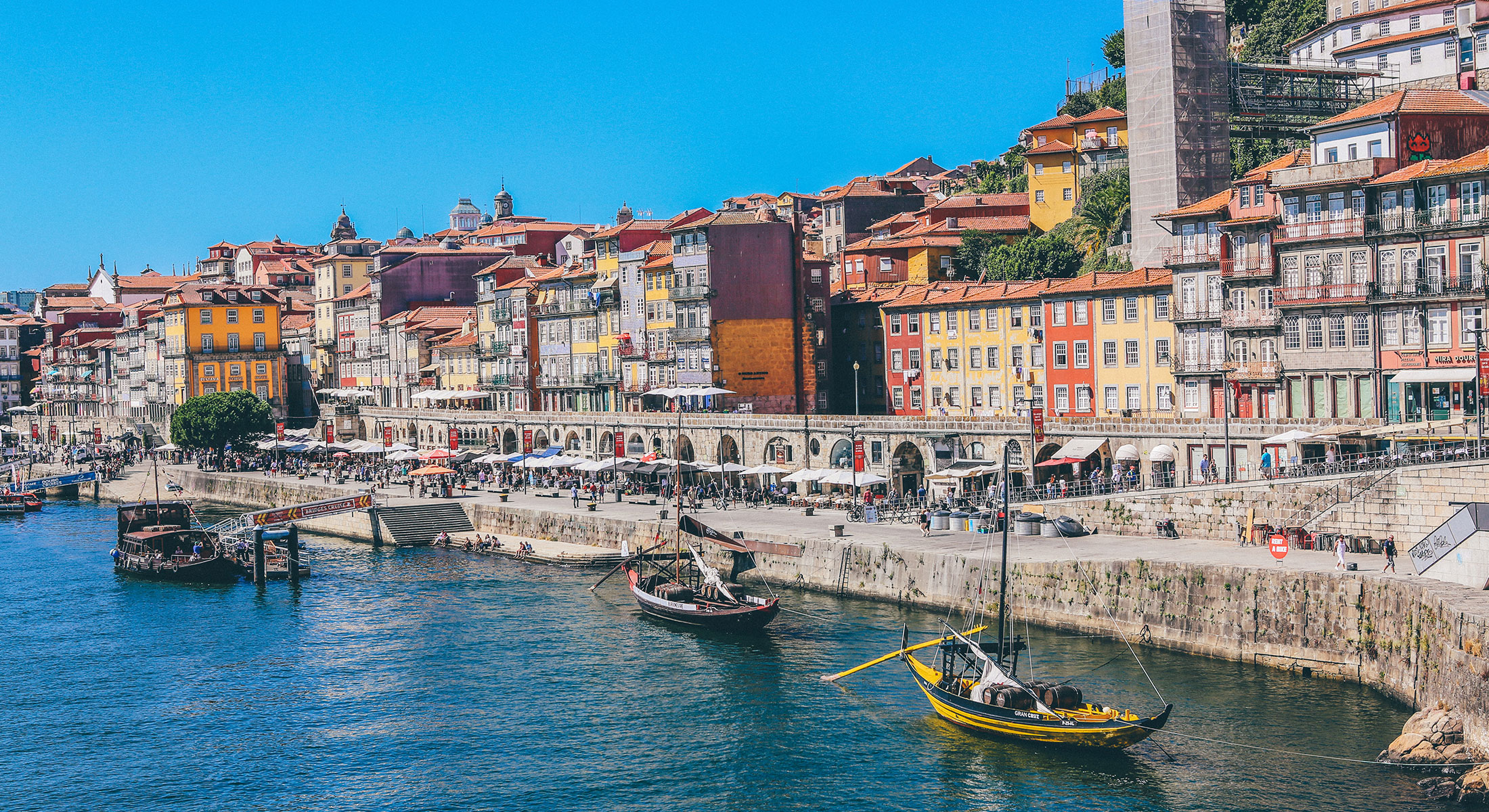 Portugal shares the Iberian Peninsula with Spain. Its landscape is varied with green mountains in the north, a near-desert landscape in the Alentejo region and excellent beaches in the Algarve on the south coast. The official language of Portugal is Portuguese which is today one of the world’s major languages, It is the language with the largest number of speakers in South America, spoken by almost all of Brazil’s population. It is also the official language in Angola, Mozambique, and Macau.

Ghosts of the Past

Celts, Romans, Visigoths, Moors and Christians all left their mark on the Iberian nation. Here, you can gaze upon 20,000-year-old stone carvings in the Vila Nova de Foz Côa, watch the sunset over mysterious megaliths outside Évora or lose yourself in the elaborate corridors of Unesco World Heritage Sites in Tomar, Belém, Alcobaça or Batalha. You can ponder the rise and fall of ancient civilisations in the Celtic Citânia de Briteiros or the ancient Roman Cidade de Ammaia, and explore Portugal’s most enchanting settings in palaces set above mist-covered woodlands, craggy clifftop castles and stunningly preserved medieval town centres.

Freshly baked bread, olives, cheese, red wine or crisp vinho verde (young wine), chargrilled fish, cataplana (seafood stew), smoked meats – the Portuguese have perfected the art of cooking simple, delicious meals. Sitting down to table means experiencing the richness of Portugal’s bountiful coastline and fertile countryside. But you don’t have to sit; you can take your piping-hot pastel de nata (custard tart) standing up at an 1837 patisserie in Belém, or wander through scenic vineyards sipping the velvety ports of the Douro Valley. You can shop the produce-filled markets, or book a table in one of Portugal’s top dining rooms.

Outside the cities, Portugal’s beauty unfolds in all its startling variety. You can go hiking amid the granite peaks of Parque Nacional da Peneda-Gerês or take in the pristine scenery and historic villages of the little-explored Beiras. Over 800km of coast offers more places to soak up the splendour. Gaze out over dramatic end-of-the-world cliffs, surf stellar breaks off dune-covered beaches or laze peacefully on sandy islands fronting calm blue seas. You’ll find dolphin watching in the lush Sado Estuary, boating and kayaking along the meandering Rio Guadiana, and memorable walks and bike rides all across the country.

Festivals pack Portugal’s calendar. Drink, dance and feast your way through all-night revelries such as Lisbon’s Festa de Santo António or Porto’s Festa de São João. There are kick-up-your-heels country fairs in the hinterlands, and rock and world-music fests all along the coast. Any time of year is right to hear the mournful music of fado in the Alfama, join the dance party in Bairro Alto or hit the bars in Porto, Coimbra and Lagos. Rural Portugal has its own age-old musical traditions, from the polyphonic cante Alentejana in the Alentejo to the pauliteiros (stick dancers) of Miranda do Douro.

Welcome to the Capital city of Portugal. On arrival, private transfer by luxury car, Mercedes or Audi, with an English-speaking driver. Accommodation in your hotel.

Buffet breakfast at the hotel.After breakfast, enjoy a city tour by touristic bus hop on/off and discover the capital of Portugal on your own.Accommodation in your hotel.

Buffet breakfast at the hotel.Free day at leisure to explore the city. Accommodation in your hotel.

Buffet breakfast at the hotel. Pick up your train to Coimbra, private transfer on arrival. Accommodation in your hotel.

Breakfast at your hotel.After breakfast, enjoy a private guided walking tour, including entrance tickets to University of Coimbra. Coimbra is one of Portugal’s oldest cities and is home to one of the world’s first universities. It was the capital of the country from 1139 to 1256 and its university was founded in 1290. Today this impressive university is still one of the world’s most illustrious and the city’s biggest attraction. Accommodation in your hotel.

Buffet breakfast at the hotel. After breakfast pick up your train to Porto. Accommodation in your hotel.

Buffet breakfast at the hotel.Enjoy a city tour by touristic bus hop on/off and discover the city on your own. Accommodation in your hotel.

Breakfast and private transfer from hotel to International airport. Proceed onwards to your next destination.